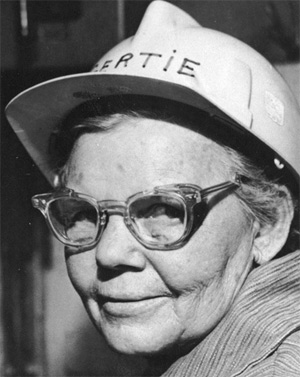 Whenever you attend an event about the history of the Colorado Fuel & Iron Company there is an infamous photo which is always displayed; this photograph is of a woman, operating a buggie on the rail mill, with the nickname “Gertie” written upon her helmet. This woman’s name is Gertrude C. (Lipich) Jordan and she is my great-grandmother. Born in Pueblo on February 14, 1910, Gertie grew up, attended school, and lived in Pueblo her entire life. In 1930 she married Frank Jordan, Sr. and by 1935 she was a stay at home mother raising her and Frank’s three children.

When the United States got involved in World War II workers from CF&I were getting drafted to go overseas, meanwhile steel work was growing. In 1943, the Steel Mill started hiring women and, at this opportunity, Gertie applied and was one of the first women to ever be hired on at the mill. For a short time she worked at the Colorado & Wyoming Railroad in CF&I, before she was moved to become a buggie operator on the rail mill. During her time as a buggie operator she transferred hot ingots to the works who made the rails. This is where she worked until she retired from CF&I in 1974.

Through the years, my grandfather and I have met many people who knew and worked with my Grandma Gertie. Everyone always has something to say of her work ethic and Tony, a fellow worker went as far to say, “She was such hard-working woman. In my time I worked with her, she not only did her job, but jobs that men wouldn’t do.” Outside of work, all of the women that were hired in 1943 were close friends for the rest of their lives. Together they would attend functions through CF&I at the Minnequa Club and would bring their husbands and families together on holidays and special occasions, truly making CF&I a family company.

Upon retirement, Gertie spent 25 years volunteering as a Grey Lady at St. Mary Corwin Hospital as well as being involved in many other organizations in Pueblo. When Gertie passed in 2004 there were many documents, photos and memorabilia from CF&I that my grandfather found among her possessions. All of these were donated to the Steelworks Museum and some of these items are on display now. In March of 2018 my family and I were blessed to be able to accept the Outstanding Women Award on International Women’s Day on Gertie’s behalf. Gertrude C. Jordan was truly a Woman of Steel.                            –-submitted by Anna Marie Jordan