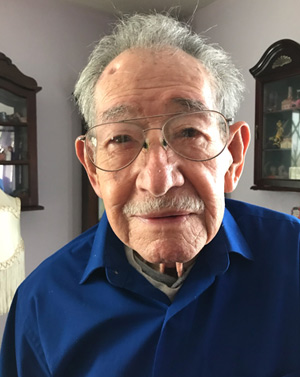 Ted T. Lopez began his CF&I service as a dedicated, self-motivated and industrious laborer on February 23, 1944 at the age of 16. Starting in the Yard Department, he and the crew worked to unload 25 cars a day while the boss would stay below and build a fire. When it snowed the crew would have to eat quickly so that their lunch wouldn’t get wet. Four weeks later he got a job driving the crew to the Southside Dump where they would dump 2-3 cars loaded with glowing red flue dust, and he would assist the bulldozer operator so he could push the slag over the side. One day the boss sent the crew to change the rails, a task normally taking about four hours to complete because the rails were bolted to 6” steel flanges. Ted knew a crew from another company picking through the slag for steel scraps and selling the scraps back to CF&I and gave them a six-pack of soda asking they help change the rails. Ted organized the two crews to help remove the nuts from the ties, lift the old rails out and put the new rails in place using the other crews’ boom truck. It took them all about 2 ¼ hours to complete the rail changes.

Working at the Cement Mixer, across the street from the Roll Shop, Ted waited for CF&I Truck #27, a snub-nose with a long bed truck loaded with roll back up into the shop. The driver was having problems backing the truck. Ted stood there laughing. Now that roll had to be trued-up, cleaned up and but taken back to the mill from where it came (remember this was war time) and it had to be put back into service as soon as possible. The Foreman from the trucking department saw Ted and asked why he was laughing. Ted told him, “Because the dummy couldn’t back the truck in.” The Foreman asked Ted if he thought he could do it. Ted got into the truck and backed right in! The Foreman took his name and Brass Check # telling him next time he needed a driver he would ask for him. Ted got to drive the truck often and in 1945 transferred to the Open Hearth Labor Gang. A short while after that he transferred to the Ingot Stripper where the crew would remove molten steel ingots from the molds, clean the molds and load them onto the empty carts to be refilled back at the Open Hearth. The 40” ingots would be loaded and shipped back to the Rail Mill where Ted worked until 1961when he lost his left arm due to an auto accident.

Never giving up, Ted did everything he could to continue his employment with CF&I to support his wife and seven children. He adamantly refused to go on welfare. Ted always did more than was required, like cleaning around the departments, willingly helping anyone who needed a hand (no pun intended) just to stay busy. Before retiring November 30, 1968 Ted worked at the Wire Mill, Drawing Room and Scales. He served on the Board of Directors for Bessemer Historical Society, Inc. A neighbor who worked at a casting foundry where cast iron pipe covers for the Colorado Coal & Iron Company were made saved and gave the cover to Ted. He cleaned, painted it and donated it to the Museum. Now 91 years old, Ted shares many memories of his years with CF&I with pride. — submitted by Midge Lopez Tapia